Bumper Car Studios is a two-person dynamic duo. Additionally, they are two of the biggest fans of old school Nintendo, Gameboy and other classic consoles. Today they take a step back into the future with their latest release, The Adventures of Sullivan. This retro inspired game drives home classic feelings of 2D arcade side scrolling game with neighbourhood friends. Bumper Car Studios takes us on their journey as developers, their new game and insider tips for new developers. 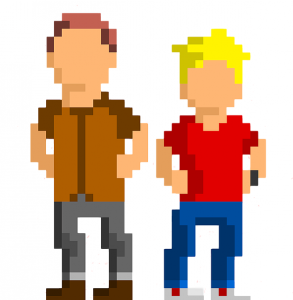 Tell us a little about Bumper Car Studios and how you got your start in the industry?

We are a two man team of brothers who have always had an appreciation and attraction to technology, gaming, and creative endeavours that result in a shared experience. We've been playing video games our entire lives and after years and years of playing other peoples games, we felt a calling to make our own. We spent a long time researching the process behind creating and publishing games, what engine we should start developing on, what audience we wanted to appeal to, and what we wanted to get out of it all.

We feel it's important to know your roots, and celebrate them, so we were really interested in making pixelated, retro themed games with modern gaming elements to create a familiar but fresh experience. The Adventures of Sullivan started as an exercise in coding mechanics and pixel artwork, and it slowly became something more. After some time went by, we knew we had something special, and decided to make it a priority, and started telling the world about it. Over a year later, it's great to see people playing our demo, giving us feedback, and having fun with it!

The Adventures of Sullivan is a fast-paced 2D arcade styled side scroller. Where did the concept come from and what was it like bringing it into development?

Conceptually we were inspired by old school, shoot 'em up side scrollers that while simple, were often difficult and addictive. While modern AAA games with complex systems and storytelling create an amazing experience, we've often felt nothing really compares to the countless hours spent with two buttons and a D-pad. We wanted to recreate the feeling of playing on an original Nintendo, or putting a quarter into an arcade cabinet and seeing how many enemies you could blast, and how long you could survive without dying. The formula is a relatively simple one, and that's why it works.

What games inspired you as an Indie Game developer?

We grew up with some of the best 2D games ever made! Games like Metal Slug, Mega Man, Contra and Battletoads were some of the titles we were inspired by, and will never forget the feeling of playing. There are several others but those are at the top of the list.

You started a Kickstarter recently for The Adventures of Sullivan. What are your hopes for the game when you are fully backed?

We would love to make a Mac version of the game, as well as release the game on consoles if the reception of the PC release is positive. After releasing on Steam, we will be releasing the game on three other digital marketplaces. We would also like to expand the options menu of the game so players can fine tune their experience, add old school effects like a CRT filter, and even select from alternate game modes that create an arena style of play. Lastly we are looking to release the game in other languages besides English. We will constantly be upgrading the game even after release. Feedback from the indie community is very important to us, so we will strive to fix and improve on anything people might feel is lacking.

"Make sure you're doing it for the right reasons. Enjoy the process, and don't just do it for the money!" ~ Bumper Car Studios

Start simple. Making a game utilizes every medium out there. We are coding, drawing, making music, creating sound effects, marketing etc. Even very simple games are difficult to make, and make fun. Don't try and make a gigantic RPG for your first game, you may never finish it. You should also know your audience. Know who you're appealing to and why. Lastly, make sure you're doing it for the right reasons. Enjoy the process, and don't just do it for the money!

Where can our readers follow you and keep current with your work?

We can be found at Bumper Car Studios where we'll soon have a news section for what's happening in our world. We are keeping our Kickstarter updated with everything related to our crowdfunding efforts at: Kickstarter

Otherwise visit our itch page at itch.io to grab the demo, and see what people are saying about it. We make sure to read every post!

Sharing is Caring! Help get the word out for Bumper Car Studios and their Kickstarter by sharing this interview on social media. Click on our social icons below.