ToeJam & Earl: Back in the Groove

ToeJam & Earl: Back in the Groove is a Revival of Awesome

ToeJam & Earl: Back in the Groove is one of the most anticipated games of 2019. This dynamic duo crash land on earth once again in a 90's Hip-Hop infused throwback. This classic return has retro Sega Genesis gamers biting at the bit for the sequel. Not to mention, you can expect to see all your favourite characters including present stealing Mole, Wise Old Carrot as well as those pesky red devils. The gameplay appears to be similar to the franchise norm but trailers reveal a more ramped up graphics with new interesting characters. 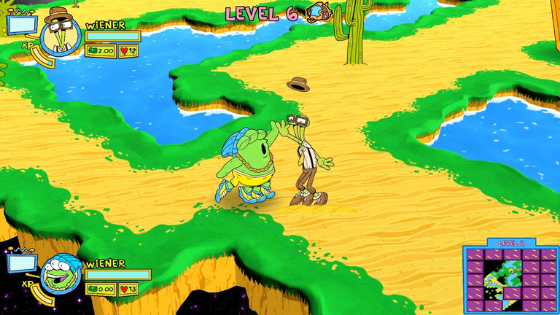 Lead by original creator Greg Johnson and his company Humanitarian Studios they ventured out to find how the interest for a fresh release would do for ToeJam and Earl. With the launch of their Kickstarter in early 2015 they quickly saw an automatic interest and by March 25, 2015 they had a fully funded Kickstarter with over $100,000 over the asking goal. An Indie dream comes true and a positive test of time for the series. Time travel to the future and Greg now has his eyes at launching for major consoles such as  PS4, Xbox and Nintendo Switch. Expect the game release for March 1st 2019.

An Early Dose of ToeJam & Earl: Back in the Groove

It's not easy being teased with the launch for over three years. However, for those that seriously want an early dose of the whacky aliens, try giving these TJ&E classic  titles and cameos a try.

These title are still floating around and worth the play. These classic titles will give you a fresh warm up for the intergalactic release this Spring on all major consoles and PC. What are you expecting in the latest release of ToeJam & Earl: Back in the Groove? Leave your thoughts in the comments below.