Mikel and Ramon are some of the hardest working developers in the industry. Together, their combined efforts have created a strong following of fans with the Demo release of the 2D action-adventure game Unsung Warriors. The game boasts of over 18K downloads, brilliant gameplay, and an amazing in-game environment. Mikel and Ramon explain what it took to bring the game from concept to development. Also, we get a look at the Kickstarter as well as tips for those wanting to follow a career in game development.

Tell us a little about Unsung Warriors and its gameplay?

Unsung Warriors takes place during the Iron-Age, around 300 BC. You play as a Celtic warrior who suffers from a curse of immortality that is slowly turning him mad/evil.

We currently have a demo available called Unsung Warriors – Prologue. This demo contains a story of its own that takes place before the events of our main game. It’s free for download on Steam, Itch.io and Gamejolt.

Our game is a 2D action adventure game. It’s a mix of different genres such as roleplaying, platform/Metroidvania and hack ‘n slash games. Unsung Warriors can be played single player or with a friend in local co-op mode.

The game has been a journey from concept to development. How did you come up with the concept of the game and what did it take to move into development?

At the start of the project, we‘ve used ‘rapid prototyping’ to create a playable version early in the development cycle. This is an iterative process that focusses on testing ideas in a rapid tempo. The goal is to get a grasp on the aspects of the game that are fun and to ditch ideas that don’t work. This can sometimes be difficult. The trick is to stay objective and flexible. So you’ll be able to pick and choose solutions that work best, and not get too attached to a certain idea too much.

We wanted a tactical kind of gameplay that encourages players to pay attention to multiple enemies at once. Timing is very important in our game. You’ll have to know when to defend, when to attack and when to dash out of harm's way or to use dash as an attack. Simply bashing the button will not work in most cases.

Later on, in the development cycle, we decided the theme for this game. The Iron-Age is a very interesting time. It has a certain mystery to it. We have taken inspiration from various sources, such as Asterix & Obelix (comics), Robert E. Howard’s books (Conan), and games like ‘Chrono Trigger’ on the Super Nintendo, Undertale and the ‘Witcher’ games (PC).

Congratulations for getting Unsung Warriors to Kickstarter. What do you plan to accomplish with the game when fully funded?

The most important gameplay systems are solidified and playable in our demo. The reactions we’ve got from players from all over the world have been fantastic and their feedback has been very helpful.

The next step would be to expand on the fundamentals and tell the entire story of Unsung Warriors. We would like to turn the demo into a full-fledged title. Having a successful Kickstarter would give us the financial bandwidth to stay independent and would greatly speed up the development process of our game. Also, It would make the difference between us working part-time or full-time on this project.

Your team is offering a ton of really cool goodies with pledges and funding. What is your total funding goal and what are some of the cool rewards you are offering with pledges?

Our game characters will eventually start to react to this. New characters will travel to the shrine and gradually the place becomes more populated. We can’t wait to reveal more of the things to come. That’s why every pledge counts and is greatly appreciated. 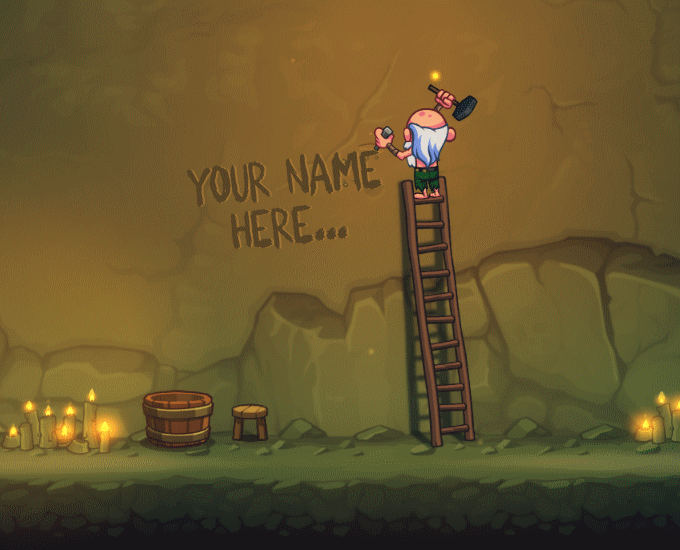 We have 30K as the funding goal for our Kickstarter. All the names of the people who pledge €5 or more will be honored on the cavern of names. We will personally contact every backer with the question if they want us to put their name on the wall... It’s optional, not mandatory.

Pledges of €12 and above will get you a copy of our game on release. Pledges of €25 or above will unlock beta access, so you can try (or test) parts of the game during development.

Pledges of €50 or €100 will grant you a digital or hardcover art-book.

At the highest tiers, you can unlock a painting of yourself in the style of the game for €300.

Get a statue for €450 or even an NPC (non-playable character) for €1000. We will work together with you on creating a dialogue for your character.

Where would a gamer go to get access to Beta testing Unsung Warrior?

As we want a dedicated pool of beta testers, we’ve decided to set beta access as the reward for people that pledge over €25. Please visit our crowdfunding page if you are interested.

Never stop dreaming. Stay focussed and stay on the path that you have chosen for yourself. Don’t let others decide this for you.
~ Mikel and Ramon

Be good at one thing at a time. Make sure you know how to finish things, Although, that goes for any industry. Once you have that under control, you can branch out if you’d like. Don’t count on just your education experience, instead put in a lot of free time into perfecting your skill. Increase your level to the point where people are beginning to notice. Additionally, never stop dreaming. Stay focussed and stay on the path that you have chosen for yourself. Don’t let others decide this for you.

Where can our reader follow you and keep current with your work?

Links to the demo, social media and the opportunity to support this project can be found on our Kickstarter .